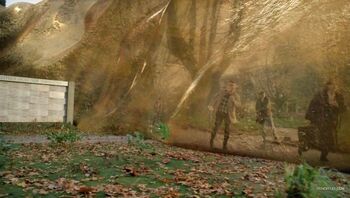 Amber is an advanced substance that starts as a gas and hardens into a solid, mineral-like substance similar in characteristic, color, hardness and translucency to naturally occurring amber, which is typically a fossilized and mineralized version of ancient tree sap.

Amber is used to isolate and protect quarantined regions in the Alternate Universe, where it is prominently found, but it has been used and seen in the Prime Universe as well. Any person trapped in amber is not killed but placed in a state of suspended animation. Due to the hysteria that this knowledge would cause, it is not well-known, and as far as the general public is concerned, loved ones trapped in amber were killed.

Amber was first seen during the third investigation of Fringe Division. Matthew Ziegler was an assassin working with an unknown organization to obtain a glass disk from Evelina Mendoza. Ziegler had a canister of amber, which he released on a public bus. Prior to escaping the bus, Ziegler stole Mendoza's backpack. Fringe Divison arrived on the scene to discover that the substance was patented by Massive Dynamic. ("The Ghost Network")

Amber was not seen in the prime universe again until much later. Following Walter's acquisition of Massive Dynamic, an enormous soft spot in the universes developed at an apartment in Brooklyn. Fearing a vortex similar to those on the other side, Walter enlisted in Massive Dynamic to obtain amber. He planned to amber the entire block. This suggestion was met with much controversy. Walter explained that a vortex would cause much more public hysteria than the amber, which at the time, was something the public was aware of. The procedure was called off at the last minute, however, as Olivia Dunham and Peter Bishop were able to resolve the situation. ("6B")

Later, in an alternate 2026, amber was used to heal where our universe had started to break down (much like its use on the other side) now that the alternate universe was destroyed. ("The Day We Died")

In the year 2015, the Fringe Division (including Walter Bishop, Peter Bishop,Olivia Dunham, Astrid Farnsworth, and William Bell) ambered themselves when the Observers took over. Walter, Peter, and Astrid were all freed by Simon Foster and Henrietta Bishop in the year 2036 while William Bell's hand was cut off by Walter in order to access a storage facility. ("Letters of Transit") Amber was obviously quite prominent in 2036 as there was a large block in Columbus Circle and a group of black market dealers known as "amber gypsies" who sold ambered people they had recovered. ("Transilience Thought Unifier Model-11")

Amber is much more widely used in the alternate universe. The public is aware of it, as well as Fringe Division. Because the effects of The Pattern took a greater toll on the Alternate Universe, vortexes were much more common, as were the use of Amber to quarantine those incidents. Amber was developed by Secretary Walter Bishop. The substance was called Amber 31422.

Community content is available under CC-BY-SA unless otherwise noted.
Advertisement