What's on your mind?

Hey, remember when Pacey talked to Grams in front of Walter´s Lab? xD 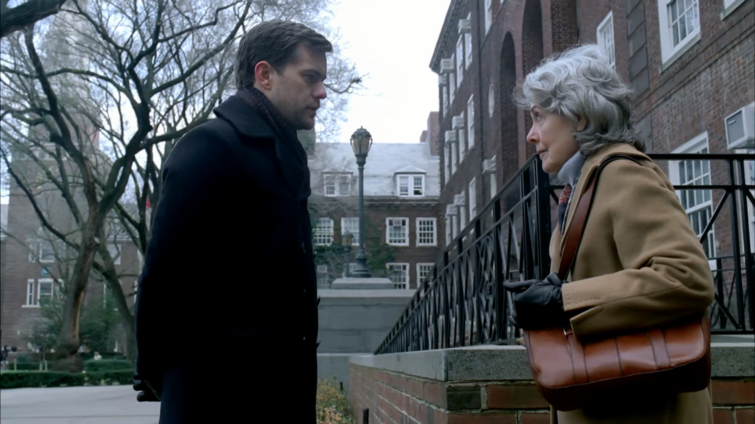 I can find it here just fine, but for some reason I can't find it in the app.

Walter Bishop and William Bell are the most intelligent scientist alive. They could explain or create supernatural events with science. They made their labratory as a playground to discover other universes. Walter Bishop then realized that his brain is triggering him to tamper the structure of nature and causing hazardous problems for the future, like the cortexiphan trials. According to Bishop's theory, if he removes the certain parts of his brain, he would stop the cruelty.

As Observers, - highly intelligent specie that was developed by scientists. They also have a brain chip attached to their spinal cords. That brain chip gives them the ability to walk through time, teleport and read minds. The brain chip is the essence, or the source of becoming an observer. The observers, do not feel any emotions or empathy because of the brain chip.

Now, I correlate Walter Bishop's certain parts of his brain to this brain chip. They both blocks emotions and lead you to become a highly intelligent robot. Fear, hatred, love, jealousy, anger, happiness...

What makes us human essentially is empathy, the emotional intelligence. Without our emotions we wouldn't know where to stop. There will be no good or bad, there will only be goals, tasks, missions to complete. We would perceive music as just random rhythms and sounds, meaningless many sounds.

High Intelligence should always prioritize emotions. Without emotions, we have no control mechanism.

Hey everyone! I got a fun little announcement for you: Fandom will be starting up community Watch Parties. Not Fringe, but we're still kicking things off with something spooky that also explores alternate worlds: Stranger Things! Mandy, a Fandom Community Manager, will be hosting 2 episodes every Friday in April at the same time until we finish Season 1, starting this week on Friday, April 9, at 5 PM EST!

So if you're interested, come join us for some fun at https://scener.com/fandom. Give us a follow there if you want updates on when we go live. You will need to use your own Netflix account to be able to watch along, as well as have the Scener extension downloaded on Google Chrome (https://www.scener.com/get). To make everything go smooth at the time of the watching, best set up your account already, so any issues may be dealt with beforehand so you don't miss a thing! At the time of the streaming, it will say on the Fandom profile that we're live and you can just click join from there.

Anyone is welcome to join and come hangout, so we hope to see you there! 😄 If you have any questions, just ask!

Not a complaint but it occurred to me that in Season 2, Northwest Passage... There is no way in a million years that any Sheriff in their right mind would not have called the FBI the moment they discovered a body with brain tissue having been extracted. It would have also raised a flag to the Fringe division before Peter calls Broyles who would have recognized it as a Fringe division case when Peter called him anyway and thus would not have waited so long to tell Olivia where Peter was. Nonetheless, the entire episode had a distinct X-Files feel to it even more so than usual and very fitting then that the direct reference "I think you WANT TO BELIEVE" is found here.

I have watched Fringe many times and I have always wondered how long did Walter know that Olivia was Olive from his FL trials? Have I just missed that bit of information or was that just glanced over? It's always been a plot hole for me!

I've watched the entire series several times (best way to use your time during a pandemic, imho). Season 3 has Olivia and Fauxlivia switch universes.  The idea is, its not easy to cross over, and those that do need to be put in a hyperbaric chamber for weeks to recover.  The reason Olivia can is because of the injections she got as a child, gave her special abilities to be able to cross over seemlessly.  Fauxlivia did not get those injections, so how was she able to cross without needing the hyperbaric chamber? Recover from the jump? She was able to meld right into Olivias life. Same for when Walter went over to get Peter, why was he fine physically (with the exception of being shot)?

If the action of Walter and Michael led to Observers not existing then wouldn't Peter have died in the ice as a chikl when Walter was bringing him from the alternate universe to the regular? September was an observer who saved Peter but he would no longer exist so Peter would die and not ever meet Olivia never mind have a child with her.

I just arrived here in searcb, perhaps too late, for an answer to a very strange question. Fitting, I think, considering the subject matter. I want to know what your theories are on why nearly all the numbers used in Fringe are part of the 147 pattern. I'm talking EVERYWHERE. The clocks, license plates, buildings, statistics, conversations, you name it. Some version of 147 (i.e. 14, 47, 17, 74, 0047, etc.) Has been used in almost every episode of Fringe. It often seems as though they pan directly to the clock to highlight an occurrence of these numbers sometimes. I have my own theory, and it's way too weird to just offer up; so I just want to know if there's anyone else out there thinking the same thing?

Hello. I am new to this wikia, so I do not know if/what the rules are regarding images.

I have been looking for images from specific epsiodes (e.g. Fringe Division logo in the futureverse), but I can't find any galleries for episodes, characters, organizations, etc.

Is there a rule on this wikia regarding galleries? As in, is there a reason there are no galleries? Or is there simply not a need for them?

(edited by A Fandom user)
September

In which episode walter plays sound of the womb?

well make sure to watch "The Croats" show, fall of casterly rock is soon coming!

Recently started watching this show.. so in the beginning of this episode Olivia’s sister is complaining about her daughter lying about brushing her teeth.. she says “she reminds me of you!” But the subtitles say “would you arrest me if I killed her?” Then they both laugh and it goes to a new scene. Just curious if anyone knows if this was an original line in the show and they changed it or what?! Just thought it was pretty strange.. I mean in comparison to the show this is obviously small potatoes but I’m still curious🙃 anyone have any info about this?? Thanks!

I'm a huge fan of John and I have only recently watched Fringe, Sleepy Hollow and Elementary, for reasons I won't bore you with.

Did you know that you can now get a personalised video from John for say a birthday or anniversary or pretty much any reason you want to ask him via a site called Cameo. You can see exactly what I'm talking about in this YT video of John himself talking about it https://www.youtube.com/watch?v=uOfk0PaK5yA

(edited by A Fandom user)
Fringe

Hey guys, which books or subjects should I search, related with the Tv Show, besides Quantum mechanics?